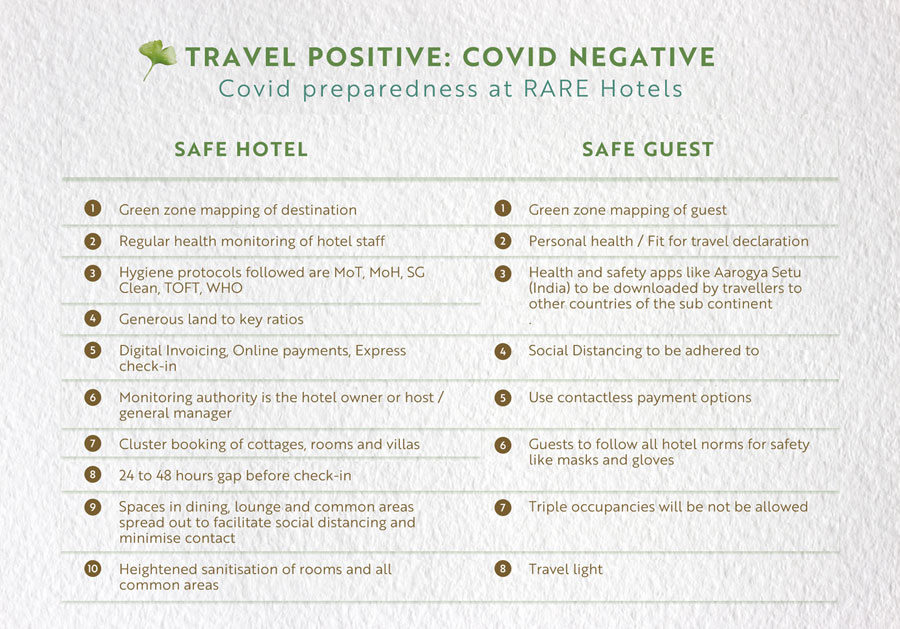 The abundance of India’s heritage and culture is no secret. Massive forts, breathtaking landscapes, and a wide variety of art forms have long been an integral part of our traditions. A range of heritage hotels associated with the RARE India Community aim to preserve these intangible culture aspects of the nation, without compromising on sustainable luxury practices. On World Heritage Day, we bring to you some of the many gems the community has set up for their guests to explore. By Bayar Jain

Translating to the House of Trees, the Lchang Nang Retreat in Ladakh’s Nubra Valley resonates beautifully with its surroundings. Inspired by the region’s signature architectural style of using local popular trees, stones, and mud, this 17-cottaged boutique hotel has walls and ceilings adorning works of local Buddhist artists who have painted Buddhist motifs all over. This homage to heritage weaves its way in the way the retreat balances the past, present, and future in a sustainable manner. In its commitment to the past, the property honours traditional Ladakhi cultural elements by reviving old sustainable techniques of housing. Fascinating sights around the Nubra Valley including the ancient Ensa Gompa steeped in myth and history, the serene calm of Yarab Tso lake,  a storied Charasa village walk, fascinating Panamik sulphur hot springs, and the Diskit monastery with its 150-feet high colourful statue of Maitreya further add to the glory. To top the truly Ladakhi experience, local dance troupes perform dances in traditional attires.

Nothing spells Indian culture more colourfully than Rajasthan, and the Ramathra Fort manages to take it up a notch higher where the origins of the property itself is drenched in fascinating history. Granted as a jagir or fiefdom in 1645 AD to Thakur Bhoj Pal by his father, the King of Karauli, this space is believed to have served as a campsite by Lord Rama while on his journey to Lanka. Initially designed as a battle fort, today the fort has a perimeter wall crowned with parapets, wide ramparts, and a spectacular hilltop view. Inside, a multi-story palace restored using traditional building techniques and craftsmanship of local knowledge greets guests. While here, a complete walking tour of Ramathra village — a small hamlet of farmers and herders — is enough for a complete cultural immersion. Among its numerous shrines, the Ganesh Mandir and the Shiva Mandir give the best flavour of local religious life.

With a collection of Tamilian artefacts to boast of, Dvara Siruvani gives an ideal glimpse of the rich heritage of the state. Every door of the property is unique, doubling as a gateway to the southern history and hospitality of the traditional homes they have been restored from. A display of rare and precious handicrafts set the scene for homes of the bygone era, where a demonstration of kolam designs amps the experience further. In addition, games from the traditions of India like Solah Seedi, Pallanguzhi, Paramapada Sopanam and more help relive the days of the past.

Once the home to Bhanja rulers, the longest-ruling clan of kings in the Mayurbhanj district, this remodelled heritage hotel has been designed keeping this royal lineage in mind. During its restoration, the interiors were taken care of in stages, keeping in mind the unique pieces of furniture and furnishings handcrafted by the royal family. Additionally, rooms of the hotel also have artworks from around world — each collected by the elites during their global travels. While the modern and luxe designs of the property’s interiors contrast the ancient and ornate exterior, the surroundings double as a time capsule to the past. Here, art forms like the Mayurbhanj Chhau offer travellers an insight into folk dance forms that flourished under the patronage of the Mayurbhanj rulers.

Assam Bengal Navigation (ABN) celebrates the state’s regional heritage with self-designed houseboats, allowing guests to soak in the full culture, wildlife, and history of India’s greatest rivers — the Ganges and the Brahmaputra. Here, handcrafted wooden or cane furniture paired with handwoven textiles bearing indigenous motifs, object d’arts and antiques evoke a sense of homecoming. From the cane jakois and polos (traditional fishing gear) on the walls of the ship’s saloon to the bisoni (Assamese hand-fan) motifs on cushions, each piece has a story itching to be told. Whether its the Chandraidew I — a heritage vessel from the 70s; MV Rudra Singha — a luxurious private houseboat; or even the bamboo ABN Sukapha, each have Assamese motifs intricately woven in the ships.

Built around 250 years ago, the The Rajbari Bawali has witnessed the lavish lives led by Zamindars of Bengal. Today, it gives a peek into this aristocratic lifestyle. What was earlier an entertainment space for kings, and a shoot location for movies, today the palatial splendour lies in the building’s octagonal gazebo in the centre, a broken iron bridge to connect it to the land, and a brick patio in the distance — a spot where the king would once be seated. After years of meticulous restoration, the property now shines forth with much of its former grandeur that stands testimony to its rich history and architectural heritage. Moreover, beyond the village houses, into the thick forests beside the marshy ponds, the exquisite Jaltuni Bagan stands gracefully amidst hundreds of water hyacinth.

7. Soulitude in the Himalayas, Ramgarh, Uttarakhand

Poetry echoes in each of wall of the Soulitude in the Himalayas, Ramgarh. Located close to the Kumaon region’s several lakes, namely Nainital, Bhimtal, Naukuchiatal, and Sattal, Soulitude in the Himalayas has doubled as an abode for legendary poet Rabindranath Tagore when he wrote  a part of his famous poem Geetanjali here. In fact, it has also been home to Hindi poet Mahadevi Verma. Naturally, then, the experiences at this property also underlie similar poetic undertones. Whether you choose to trek to the Tagore top, the very spot where Geetanjali was written, or visit Mahadevi Verma’s museum, you’re bound to find yourself enthralled by every excursion. Adding to this, guests are also encouraged to explore local Kumaoni culture via their Village walks and Temple trails. Along the way, biting into delicious fruits is a must — given that Ramgarh is known as the fruit bowl of Kumaon!

Nestled in the rainforests of the Terai region of Himalayas in Uttar Pradesh, Jaagir Lodge in Dudhwa lies in a unique eco-system inhabited by 38 species of mammals and approximately 500 species of birds. Apart from marvelling at the beautiful fauna, guests can meet the ethnic Tharu Tribe — the indigenous locals of the region — and witness local traditions which date back to the times of Ramayana and Mahabharata. Near Dudhwa National Park lies a quaint settlement of 17 tiny hamlets, where the lineage of its inhabitants can be traced back to Maharana Pratap of Mewar. The highlight at Jaagir Lodge, however, is a special visit to the village of the medicine man, Moond Nochani — a local doctor who has been curing diseases through indigenous medicinal concoctions of plants and trees.